May 17, 2015
It's been too long since I wrote my last post on the blog. I could say that I was kept super busy and that's why I couldn't get anything written but that would mean I'm lying. Many things did happen though and I was just too lazy or too tired to scrabble something. And I didn't want to "just" write something as I wanted to tell you all something. So after getting all the photos together from my birthday trip to Amsterdam, I'm finally putting it down in words. If you follow me on Instagram (@otterly_me) or Snapchat (otterlyme), or even Facebook (Otterly me), then you definitely already saw what we were up to.
The photos aren't many because I decided long ago to take it all in through the eyes and not through the lense. Of course, it's heart-warming to scroll through photographs later on and remember everything, but even better is to have that memory in your head as it is easier to relive it when it's inside your head rather than your smartphone. 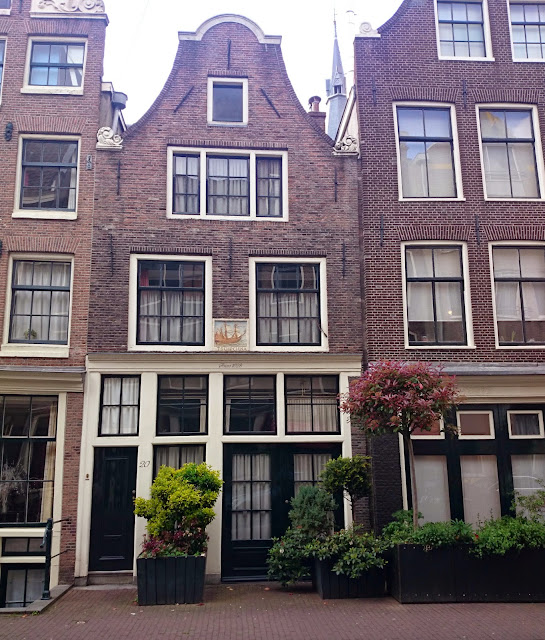 Shocker: not all buildings in Amsterdam are scrupulously even and straight. Because the whole city is practically built on water, the houses tend to lean forward or just be kind of crooked through the years. So it's almost impossible to get a straight picture of them and I believe that many photographers purely photoshop them all straight, ha. 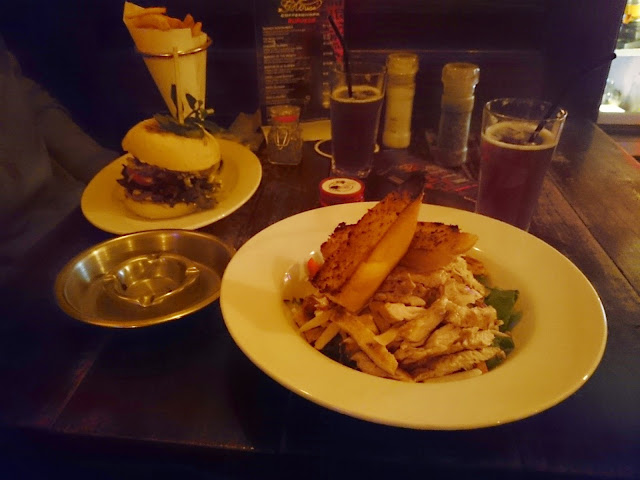 Friday, 1st of May, my so-called pre-birthday dinner. The location must've been one of the best: The Green House on Haarlemerstraat. It has got not only the probably radest menu of different Mary Jane, but also food. Oh, the food! My boyfriend ordered the Lamb Burger and I had Ceasar's Salad with Chicken. Worth every cent. Amazingly delicious, the atmosphere so chill, crowded with many different people and the staff was more than friendly. All-in-all, I guess this was my favourite spot :D 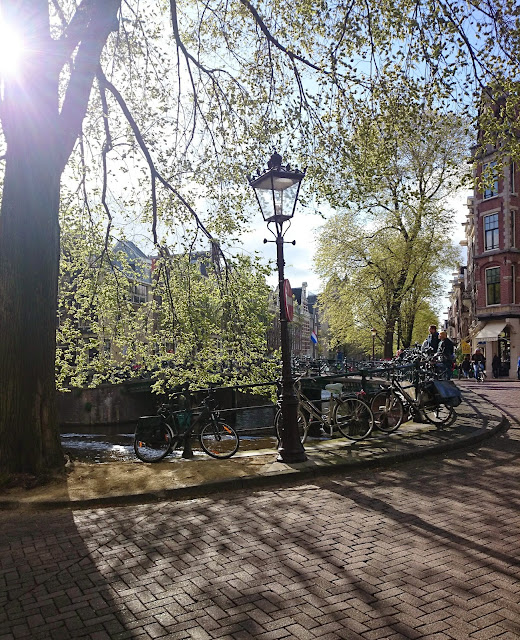 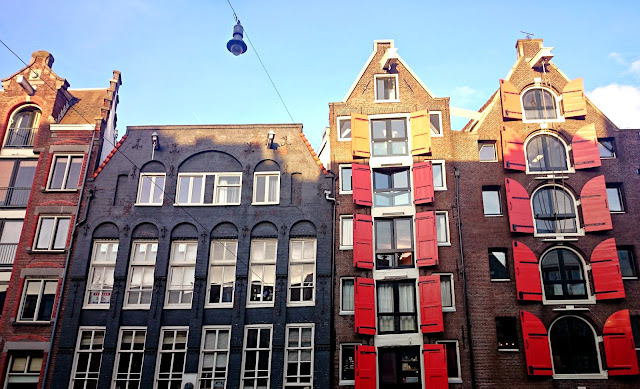 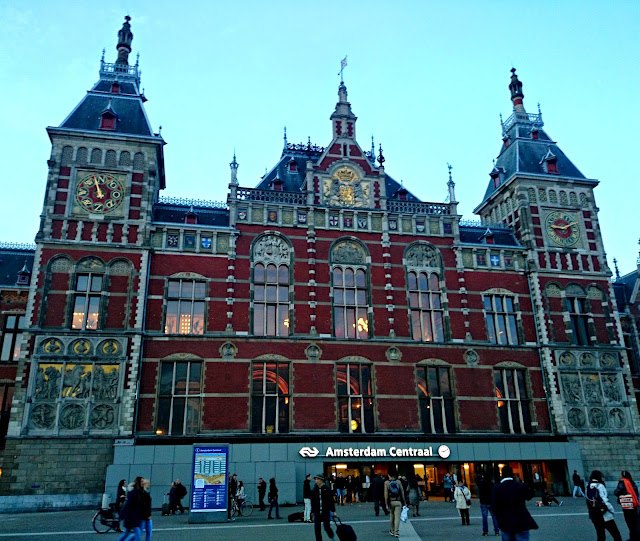 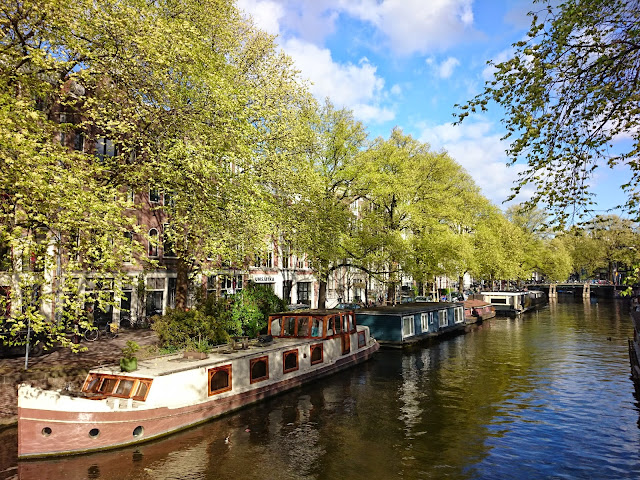 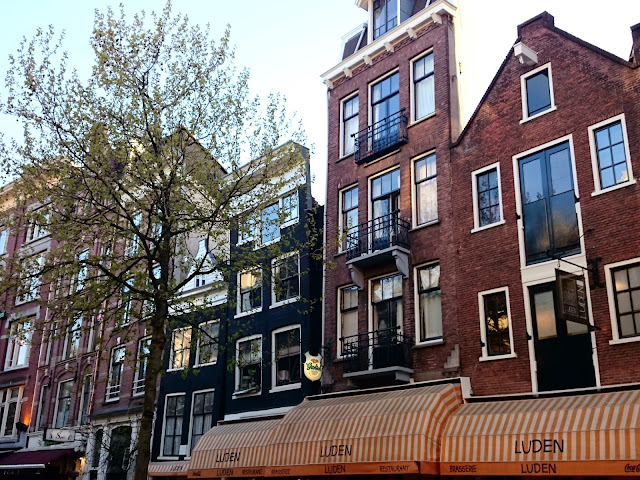 Just take a moment to acknowledge how amazing this city is. We were so lucky to have sunshine for the two days and mildly warm/chill weather that didn't bother us. On our first afternoon/evening we just strolled randomly through the city and quite frankly I didn't want to take photos of all the houses although everything was pretty much amazing and Instagram-worthy, haha. However, don't get a map (unless you're one of those tourists who has to see every monument, museum or whatever) and just walk through the city. If we didn't get lost (which we normally do), then you're safe too. 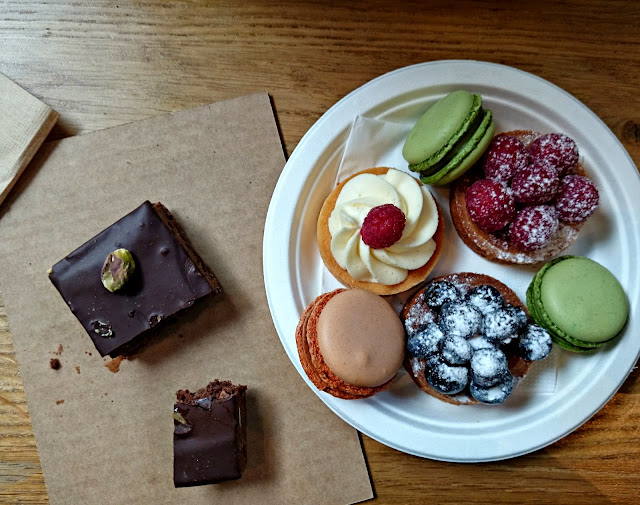 And the second day we started with a late breakfast at De Foodhallen. It is t h e spot for everything kind of hipster, but in a good way. There are many options to choose from of different ethnic street food little places, from Indian to American to Parisian. As you can see, we indulged a lot on the famous brownie and macarons, other pastries and smoothies. And we went back there again later for some burgers and hotdogs, and also on the last day we had breakfast with homebaked pie slices. As we had already planned, we spent a fortune on food because it was just incredible. I'm not talking about the traditional cuisine but about the variety of different possibilities of food and beverages. Loved every part of this kind of "what's diet" indulgence. Because food is good, starving is a no-no.

De Foodhallen isn't just about food. There also some shops (not the cheapest ones) with unique pieces and of course, bikes, and a barber shop and an uber-cool parking lot for bikes. h o w   c o o l   i s   t h a t . 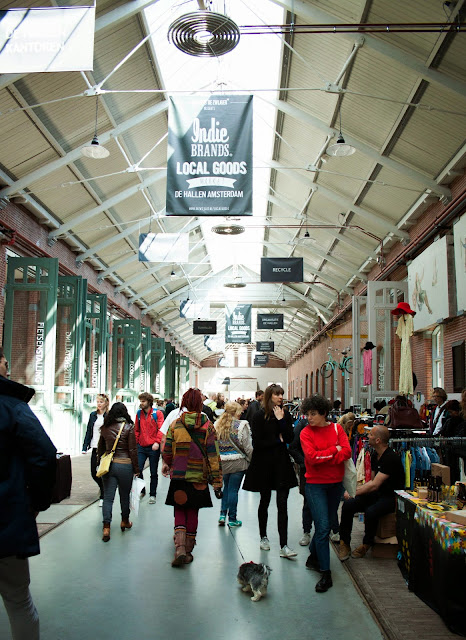 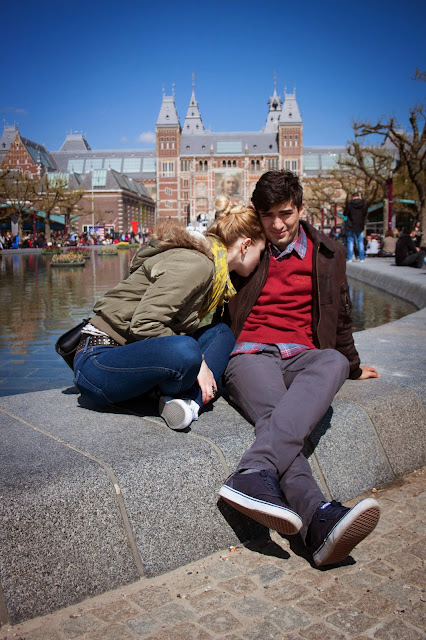 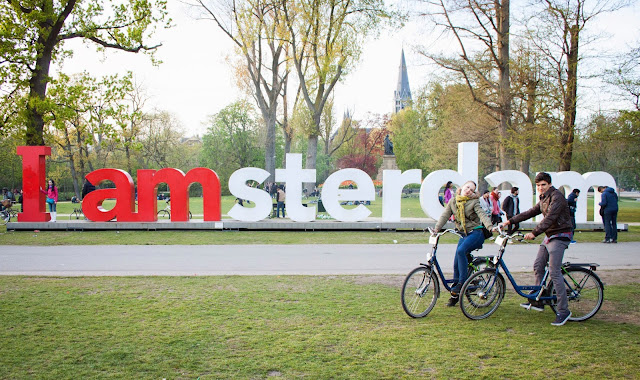 And on the 2nd day we were lucky to get bikes and do a different kind of "touristing". Quote of the
day: "hello, this is the bike lane *drin drin*". GET A BIKE when you're in Amsterdam. The public transportation is really cool but, seriously, rent a bicyle. Ten times more fun. And, of course, a photo by the I Amsterdam sign, but this is the less crowded one that moves around the city from time to time. 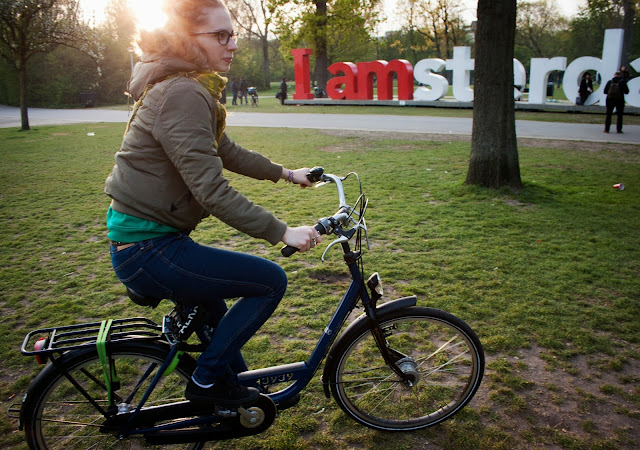 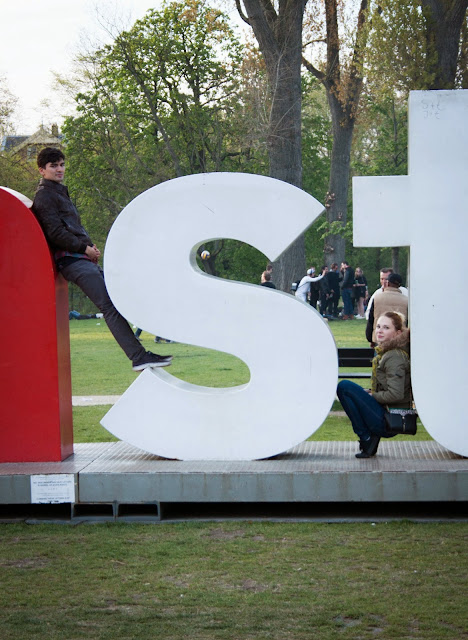 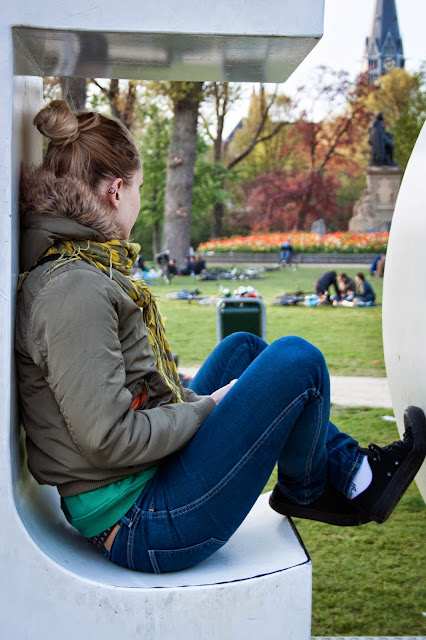 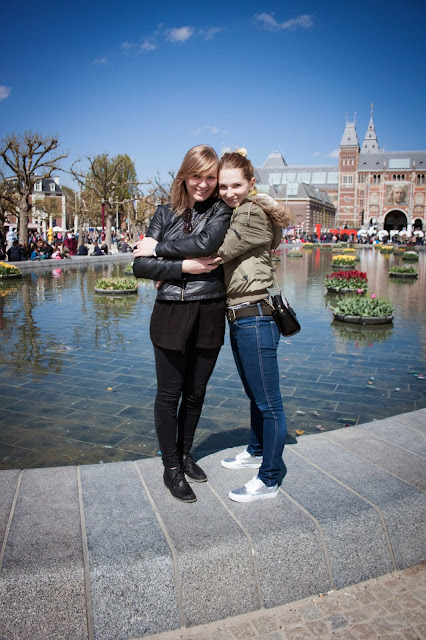 This was the best birthday ever (until now the best one was when I had a Pikachu cake. jk. maybe not. jk again. am I?). And the biggest thanks while in Amsterdam goes to Zane, who let us crash at her place and welcomed us so kindly (Latvians unite), and was our guide on the 2nd day and got the bicycles for us. Huge hugs and kisses your way! :) And thanks to my family who listened and didn't give me presents but rather helped me financially live this trip to the fullest. And a big kiss on the nose to my boyfriend who is just the best travel companion. When are we going back?


P.S. the best quality pictures are from Zane and her Canon. The other ones are from my beloved Sony Xperia Z1 compact.

Disclaimer: this is absolutely and only my opinion! haha, however, by owning too many bags, I have come to a conclusion that only few are necessary. Yes, the shiny one on sale is oh so flirty and cute, but will you ever have the guts to wear it outside and not only in front of your mirror or uploading a really art-sy pic with it on Instagram? Time has approved that quality is always better than quantity. And in the field of bags, it is really important. I will first share some tips of choosing a bag and then my top 5 bags with followable links in case you want to grab them actually. :)
(pic originally from Fashion Gone rouge, edited by me)
READ MORE » 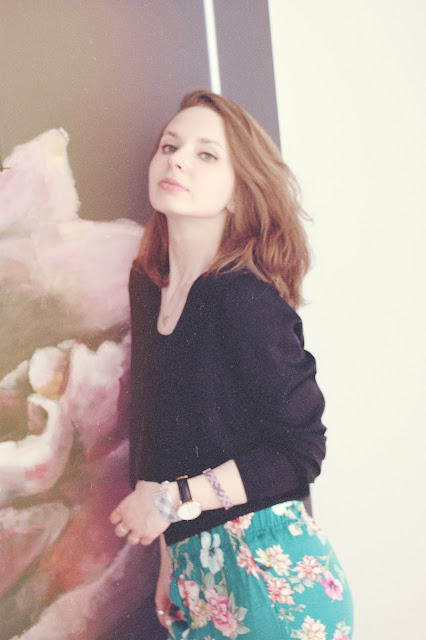 Hello there! Long time, no see. May is already upon us, spring is in full bloom and sun is gracing us with her presence longer. And just like that, I'm creeping up with some new content. I've been working, living, finding solutions to problems more than you can imagine and I got tired. But now I'm full of energy again to keep up with the blog and bring you more outfit posts! I have done quite some shopping, so I'll have a lot of newness to show you. Guilty as charged :)
READ MORE » 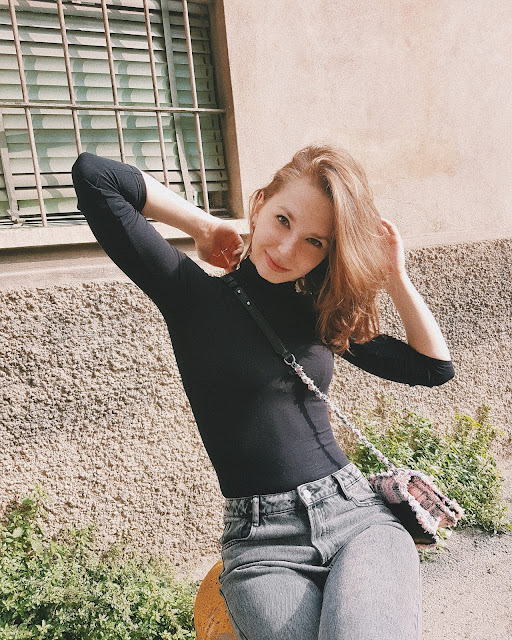 Hello there! You have probably already seen this photo on my Instagram recently and if you continue to scroll and read, you'll learn why I love this simplicity of an outfit more than I love bread.